You are at:Home»Sports»Is it Finally Time to Back a Canadian Stanley Cup Winner?

Unlike in the NFL odds, which seem to eternally rank Marcus Cannon’s New England Patriots to win the Super Bowl, the NHL odds for Stanley Cup winners are always long because the season and postseason is long and throws up many surprises.
Coming into the 2018/19 NHL season, four teams stand as the favourites while another is sneaking in due to an incredible move made in the offseason. Peculiarly, among these top five contenders, two of them are Canadian teams, and both of them have a great chance of making it to the Stanley Cup Finals – they may even meet each other there.
Thanks to the ability to place an each-way bet with some bookies and the shortest odds for a Stanley Cup winner standing at 9/1, all we need to do is back a finalist to make a profit. So, are the highly rated Canadian teams worth backing this season? 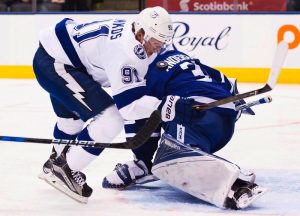 Source: SportsCentre, via Twitter
Even though the Washington Capitals won it all last season; the Boston Bruins have proven themselves to be a decent team again, and the Pittsburgh Penguins have Sidney Crosby and Evgeni Malkin, none of those three teams are considered among the favourites in 2018/19.

The Winnipeg Jets’ young stars have combined to create a superb ice hockey team – one capable of toppling the likes of the Nashville Predators in the postseason. They’re slightly behind the Predators in the odds, but if any Canadian team is going to make it to the Stanley Cup Finals, it looks to be the Jets.
There is one other Western Conference candidate that has emerged over the last couple of weeks. Starting the offseason as dark horse contenders, the San Jose Sharks made a huge move to bring in Erik Karlsson from the Ottawa Senators. Now they boast the likes of Brent Burns, Marc-Edouard Vlasic, Joe Pavelski, Joe Thornton, Evander Kane, Logan Couture, Martin Jones, and Karlsson all ready to finally go all the way this season. At 23/2, they’ve earned quite the backing at Canadian betting sites – just in case the Jets can’t build on their 2017/18 campaign.
The NHL season always brings up some surprises, which leads to the lengthy odds in the Stanley Cup betting a subsequent huge betting fan base following. This season, a Canadian team might just snap the 25-year wait for Canada to get the Stanley Cup, but there are many top-class contenders for them to deal with first.http://cms.ics- 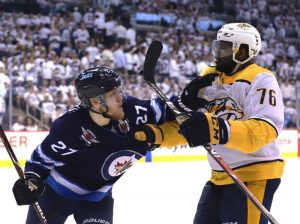 Source: Spittin’ Chiclets, via Twitter
For the same reasons as the Tampa Bay Lightning, the Nashville Predators weigh in as the Western Conference’s favoured team to win the Stanley Cup. They boast what is likely the best defence in the NHL as well as some flair-filled forwards. But, last season, the Preds succumb to an emerging force of the Central Division, the Winnipeg Jets.