You are at:Home»Sports»Basketball»The Prodigal Son 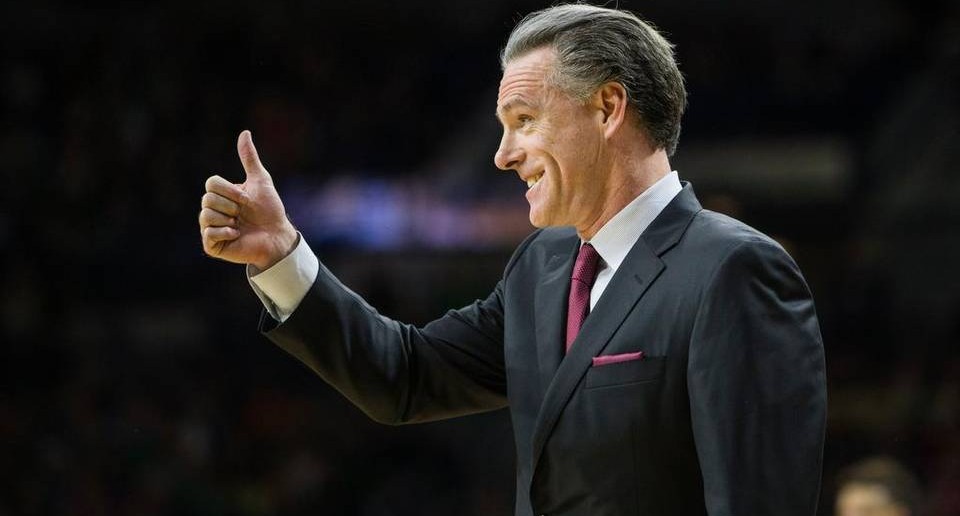 As the parable goes, one of the kingdomâ€™s sons went out to earn his way, make a name for himself, live a little, and make his fortune. After a series of adventures, and Sweet 16 appearances, he looked back at the old kingdom and wondered if maybe it wasnâ€™t such a bad place to be after all.

The TCU menâ€™s basketball program is set to welcome home its prodigal son Tuesday when James Patrick Dixon is announced as the new head coach at Ed and Rae Schollmaier Arena. Heâ€™ll likely be embraced by thousands who are eager to see basketball relevant, if not relevant again. Dixonâ€™s basketball legend looms large as part of the last batch of hardcourt Horned Frogs who were competitive for more than a single season. As a junior in 1986, Dixon was part of a team that tied for first in the Southwest Conference before winning it outright in 1987.

And, as many fans recall, â€œDixon hit it!â€ While Raycom announcers and fans alike couldnâ€™t believe it, Dixon sunk a bucket with two seconds remaining to beat the University of Texas in â€™86, thus cementing his status as one of the unforgettable players making unforgettable plays in TCU Athletics history. Beating Texas to a parking place, let alone in an NCAA sanctioned event, earns one a lifetime pass to redeem for free lunches and heroâ€™s welcomes around here. Just ask Buddy Iles.

But now Jamie Dixon will be the featured hero at many of the luncheons in the weeks and months ahead. The process to replace Trent Johnson didnâ€™t seem to take too long, as the 2016 season goes. A deeper gaze into the rearview mirror, however, might suggest that Dixon had been sought for much longer.

Various reports, even from credible media, suggest that TCU tried to woo Dixon from the University of Pittsburgh before. He had been the Panthersâ€™ head coach since 2003, and he had taken Pitt to the NCAA Tournament more times than his alma mater has collectively gone. Including the year TCU, with Dixon, almost made the Sweet 16. Yepâ€¦talkinâ€™ â€˜bout the one year we almost made the Sweet 16.

Dixon has taken teams to the second round of the NCAA tournament three times as a coach, and once to the Elite Eight. Along the way, even in the few semi-memorable runs TCU has had in the NIT, Frog faithful have wondered â€œwhat if?â€ â€œWonder if Dixon would ever come back here?â€ theyâ€™ve asked on barstools and purple chair back seats.

Until now, the brushes with basketball greatness in Daniel-Meyer Coliseum or Schollmaier Arena might have been when Kurt Thomas came back to watch a game. Maybe when Michael Irvin came back to watch his niece Sandora. But Dixonâ€™s return sets the bar so high that even Louis XIII would be the swill. TCU has never had a product win in a TCU uniform and then go on to coach as many winners as he has. So why come home now?

Maybe Dixon is a Beatles fan. Maybe, listening to Lennon and McCartney sum up one and one and one making three, he realized the TCU quotient was now worth solving. Maybe the combination of (1) a beautiful new facility and (2) one of the top conferences to compete in and (3) a reasonable paycheck added up. Itâ€™s also plausible that 13 years in one pasture makes the Fort Worth grass look greener than it did when TCU played in Daniel-Meyer with no Big Twelve foundation and a reputation for limited basketball coaching â€œresources.â€

Maybe TCUâ€™s prodigal son was ready to hug it out with Athletic Director Chris Del Conte, having met Papa Frog at a keg party a couple of decades ago.

Whatever the case, Dixonâ€™s return to the TCU hardcourt â€“ for our fans â€“ might rival the aliens returning Elvis. To Hawaii.

â€œSorry, honâ€¦canâ€™t get to Honolulu,â€ the husband said. â€œDixonâ€™s Frogs are hosting the Conoco Oilers in an exhibition game.â€

â€œBut, dear, we bought the tickets from the Martians in February,â€ said his floral-clad wife.

Within time, perhaps short time, itâ€™s reasonable to expect that the Dixonâ€™s recruiting prowess and the staff heâ€™s assembling as you read this will ensnare a player or two from the grasp of his old SWC foes. Maybe TCU will get a player who was considering one of the teams from Texas that made early exits from the tournament this year. Maybe heâ€™ll make a more compelling pitch, at 50, than his Hilltop counterpart, whoâ€™s closer to 80 than 70. Either way, savvy investors will be scooping up season tickets at a hurried clip, making those in the renewal cue look like Warren Buffett.

Itâ€™s long overdue. The stateâ€™s top players â€“ even talent from across the country â€“ continue to enjoy playing environs as friendly as Nacogdoches and Houston. Even Ranger Junior College. But those players have a voice to listen to in Fort Worth now, and it will be a voice louder than James Patrick Dixonâ€™s. With the wait for a hoops leader finally over, itâ€™ll hopefully be the voice of some six thousand-plus screaming Horned Frog fans, packing the Schoâ€™, cheering on their team as they waltz into their first Big Dance in nearly 20 years.

Welcome back, Jamie Dixon. We hope you stay a while. We hope you win, tooâ€¦but weâ€™ve been hoping for that since you beat Texas.