For nearly a generation TCU fans have stood chest to chest with in state rivals defending the program. Â While teams like Texas, Oklahoma and Texas A&M filled their roster with highly coveted players each February, TCU has thrived with player development of less sought after athletes. Â The results speak for themselves.

A team can win the Rose Bowl with a BMX Biker at linebacker and a quarterback whoâ€™s only other offer was UTEP. Â A team can win the Peach Bowl with a walk on wide receiver who treats the best defense in the SEC like a truck stop toilet, and with a quarterback whoâ€™s only other offer was- you guessed it- UTEP. Â Names like Jerry Hughes, Paul Dawson, Jason Verrett, and Jonathan Anderson confirm you can fill a trophy case and an NFL roster with less sought after players, because stars donâ€™t matter.

Except stars do matter. Â In fact stars mean everything. Â The predictive nature of top ten classes and top ten finishes is so well documented that those who argue that â€œstars donâ€™t matterâ€ sound like the guy outside my postoffice handing out literature to prove the moon landing was staged. Â A cursory look at the recruiting classes of 6 of the 7 teams that have made the playoff the first two years confirm that stars do matter. Â The lowest ranked four year average recruiting class to make the playoff was Michigan State, who turned in a Cotton Bowl performance that can best be described as embarrassing. Â Stars do matter. Â So does Gary Patterson.

Outside of the 254 area code, college football fans know that Coach Patterson is able to develop talent like few others. Â And once that talent grows ripe he is alone among his peers in creating a scheme that maximizes the talent on his roster. Â Player development plus schematic advantage has been the secret sauce for nearly a generation in Fort Worth. Â It is what allows fans to shout â€œstars donâ€™t matter!â€ Â Yet, in the arms race of college football, winning is no longer enough. Â Making the playoff is now the expectation for any team that believes they can sniff a conference title. Â The 2016 recruiting class has the potential to place TCU in a position to consistently be in the playoff hunt.

Signing Day allows for TCU fans to both celebrate a new class of Horned Frogs, as well as lament why ANYONE with all that talent would go to Texas, Oklahoma, LSU, Baylor (insert team you hate). Â Weâ€™ve all wondered, â€œWhat if Coach Patterson could recruit elite talent, develop that talent, and utilize his scheme that maximizes player productivity?” Â The 2016 recruiting class is the answer to that question.

There are four players who signed with TCU today symbolize the upgrade in talent in the 2016 class. Â Of course anyone of them could be a bust. Â Of course a 3 star recruit could start three years and be All Big 12. Â Yet, there is no denying that the TCU class of 2016 has the potential to cement their place in the Top 10 for years to come. 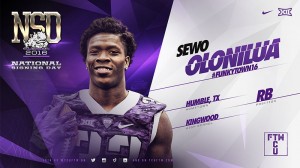 Sewo Olonilua 4 star Athlete from Humble, Texas. Â Perhaps the most spirited (or should I say annoying) conversation over the past four months has been what position Sewo should play at TCU. Â He was recruited on the defensive side of the ball and committed to TCU. Â Plans changed as he expressed his desire to play running back, a position he played at the Army All American game to the praise of his coaches. Â Sewo is already on campus and will play running back this spring. Â The combination of size, speed and athleticism make him perhaps the greatest natural athlete to step foot on campus for TCU. Â When the argument is which position will allow him to thrive in the NFL, recruiting has reached a new level. 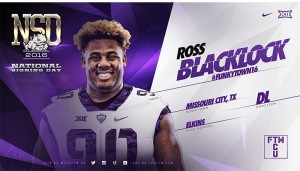 Ross Blacklock 4 star Defensive Tackle from Missouri City, Texas. Â When critics claim TCU cannot win recruiting battles look no further than Blacklock. Â He picked TCU over Texas A&M and Alabama. Â At nearly 330 pounds, this is the kind of recruit that separates elite teams from great teams. Â Scheme can put you in the right place. Â Speed can get you there quickly. Â A mobile quarterback can cause headaches. Â But there is no substitute for large defensive tackles. Â If you watch the Alabama-Clemson national title game you will see what separated them from the other 126 teams watching at home. Â Blacklock has the potential to contribute as a true Freshmen and start for the two years following. Â He possesses the size and skill set to play in the NFL. 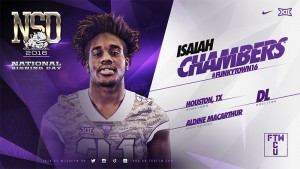 Isaiah Chambers 4 star Defensive End from Houston, Texas. Â At 260 pounds with lighting speed, Chambers has generated a reputation as an elite pass rusher. Â One full cycle in the TCU weight program will have him playing at 275 pounds. Â In previous cycles Patterson would likely move Chambers down to Defensive Tackle where his quickness would translate into a nightmare for opposing offensive lines. Â But with Blacklock outweighing him by 70 pounds, Chambers is free to utilize his speed off the edge as Blacklock deals with a double team in the box. 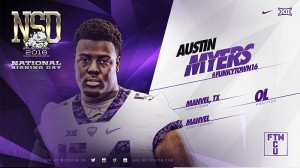 Austin Myers 4 star Offensive Linemen from Manvel, Texas. Â Playing on a team loaded with talent, Austin Myers committed to TCU early. Â Even as Ole Mis and Houston pursued him, the 6â€™5â€ 295 tackle seemed to strengthen his commitment over the past two months. Â Quick with a strong lower body, Myers will likely see the two deep as a true Freshmen. Â Five years ago players like Myers would not have committed to TCU. Â They might have visited, listed TCU in their top five, and commented on the close knit nature of the staff and team. Â Yet, the combination joining the Big 12 and a 23-3 record over the last two years puts TCU on the radar of players who would not have committed in the past.