When TCU entered the Big 12 in 2012, Gary Patterson said to expect results from the move in three to five years.

Well, year four on the recruiting trail has proven that statement to be true.

â€œThis is the most complete class for this size,â€ Patterson said. â€œI donâ€™t know if we were in the Mountain West that we would be able to put this together.â€

TCU has signed seven 4-star recruits and five ESPN 300 recruits as of National Signing Day on Wednesday, both of which are school records. The class has TCU ranked 22nd in ESPNâ€™s school rankings, which ranks third in the Big 12.

The Frogs picked up a couple of key recruits in its main area of need, offensive line. Myers and Lucas Niang will help bolster an offensive line that lost some key pieces to graduation. 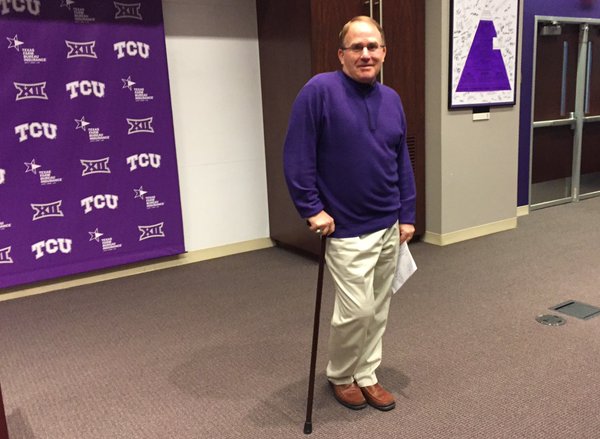 On the defensive side of the ball, defensive end Isaiah Chambers and defensive tackle Ross Blalock were the top recruits for TCU.

â€œHe moves really well at his size,â€ Patterson said of Blalock. â€œReally excited to see how he moves.â€

Patterson said he tries to stray away from junior college players, but expressed his excitement over his JuCo wide receivers.

â€œHe has tremendous speed and can do things with the ball like a running back,â€ Patterson said of Parker.

While those are some of the key recruits thus far, here is a full breakdown of the top ten recruits for the Frogs and a list of the rest of TCUâ€™s 2016 class.

Myers sheer size, coupled with his speed will help fill the shoes of Halapouilivaati Vaitai. The offensive line could be the biggest hole to fill with the losses of Big V, Joey Hunt, Jamelle Naff, and Brady Foltz. Myersâ€™ presence on Kenny Hill or Foster Sawyerâ€™s blindside could prove to be essential in 2016 for the Frogs.

-Wide receiver is far from a position TCU will be lacking from a depth standpoint this fall. But the Frogs will be searching for the next big play threat to replace Josh Doctson. Graham could be that guy. His burst of speed, proven by his 4.5 40-yard dash, could make him a key downfield weapon for the TCU passing attack.

-Parker was the top player snagged by the Frogs on National Signing Day and was somewhat under the radar considering his eye popping numbers. Finished the fall with the Apaches averaging over 117 yards per game and a whopping 23 yards per catch. Parker, who was originally committed to Oklahoma, has unreal athleticism and his burst of speed off the line will make him a downfield threat from day one. This video Parker posted last July shows his pure athleticism:

-Chambers will step into a defensive line that lost a couple of senior leaders in Davion Pierson, Terrell Lathan and Mike Tuaua. However, with the return of Josh Carraway and James MacFarland, Chambers may not see the field as a starter for the Frogs in 2016. Glass half full is he will be fresh to use his size and speed (4.8 40 yd. dash) in key pass rushing situations and will be allowed to mature under a couple of vets.

-Hortonâ€™s two years of eligibility will provide depth at linebacker, which proved to be a necessity for the Frogs in 2015 after the early season losses of Sammy Douglas and Mike Freeze. Horton will now have to battle for playing time with Douglas, Ty Summers, and Alamo Bowl Defensive MVP Travin Howard. His ability adds to what in 2016 will be seen as a position with abundance, after it looked like one of attrition in early 2015.

-The high school running back has freakish athleticism, with scary size. He rushed for 1,062 yards on only 97 carries in his senior year, using his 4.45 40 time to prove his worth as a breakaway threat. However, this guy has a defensive transition written all over him with Gary Patterson. His ability to move laterally, coupled with his great instincts and knowledge of how running backs maneuver, makes me think this is a guy you could see at safety or linebacker in Pattersonâ€™s speed-oriented 4-2-5 defense. Patterson said he will start off at running back, but donâ€™t be surprised if he moves to the other side of the ball.

-The Frogs lost a gem in Josh Doctson, no way around it. And while no one player can make up for arguably the best wide-out in school history, Williams mixture of size, speed (4.4 40 yd. dash), and vertical (30 inches) presence will provide some of the explosiveness lost from Docâ€™s departure. If you watch Williams on tape, you can see his ability will be welcomed right off the bat by Sonny Cumbie and Doug Meacham. Williams should start from day one, on the outside opposite of Emmanuel Porter.

-TCU lost their emotional leader on the defensive side of the ball with Davion Pierson graduating. Blalockâ€™s physicality will be needed in the middle complement the outside speed of James Macfarland and Josh Carraway. Aaron Curry and Chris Bradley will help shoulder the load in the early going for the youngster. Much like Isaiah Chambers, even if Blalock isnâ€™t seeing the field on every down, he should make an immediate impact.

-With the thin offensive line, there is a big reason Gary Patterson was raving about the ability of Myers and Niang. Niang will chart in as the biggest offensive lineman on the team and his brute upper-body strength will help open holes up front for Kyle Hicks and Co. in the backfield.

-As the lone quarterback in the 2016 signing day class, Wooten brings the tools to thrive in the Frogs air raid system. Wootenâ€™s ability to run complements his strong arm, as he accounted for 3,917 total yards his senior year (3,453 passing, 464 rushing, 43 TDâ€™s). Patterson has raved about his leadership skills, which will help him fit in nicely with Sonny Cumbie. Expect Wooten to redshirt with Hill, Sawyer and Grayson Muehlstein at the helm under center for the Frogs. That will help him acclimate to TCUâ€™s rapid-paced offense and to continue to mature as a leader.